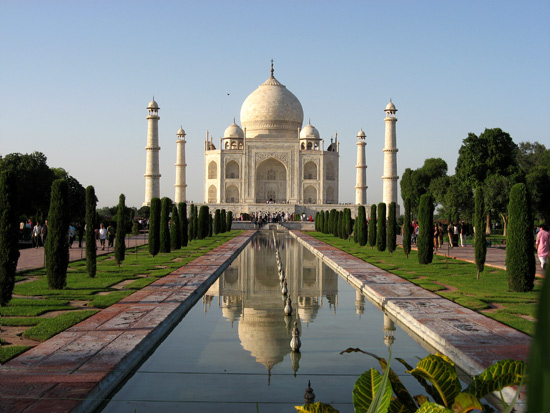 Being our second Gap Adventures trip we had high expectations. Our trip to Vietnam last year was amazing and so we obviously hoped for the same this year. Luckily we were not disapointed.

We arrived at Delhi Airport and were promtply collected by our pre organised driver. I was plesently suprised when we walked through arrivals, I was imagining a sea of people trying pester and grab my bag for a rupee. But it wasnt anything like that, it was like arriving at any other western airport. Driving into Delhi also wasnt as bad as I was expecting. After visiting Vietnam last year I was expecting the same level of traffic and scary taxi drivers breaking all the rules but it seemed much more tame.

If you are thinking of taking this trip I would recommend arriving at Delhi a day or two before the actual tour starts. We arrived the afternoon before our trip started so didnt get to see anything in Delhi. Our orientation tour was in the evening so we really only saw Delhi by Dark which was a shame.

Early the next morning we boarded our train to Jaipur. The train was just a seated train rather than a sleeper but was perfectly comfortable much like any western train. We were in a reasonably high class carrige as we had tables and nice seats. There was of course the overpacked carriges you see in the media with people hanging out the windows and doors further down the train, maybe it was a little bit of a shame we didnt rough it with the locals but Im sure we would have regretted that after a couple of minutes.

The train journey was long but they brought round food and drinks and it was interesting watching the countryside go by. It gave you a good feel for how people lived in and out of the cities. You could see why India has a bit of a reputation for being dirty. Pretty much all their waste was piled up along the sides of the tracks and anywhere there was a spare bit of ground, but again I had been imagining worse so i wasnt that shocked or discusted by it.

Jaipur is an attractive city. The pink buildings and walls are stunning and we enjoyed visiting the Amber Fort and Palace of the Winds. It was also a nice place for exploring the shops and market stools. Our hotel was somewhat out of the city though which made it difficult to just wander around. We had to take a rickshaw to get to and from the city which seemed a bit of a shame and the drivers often seemed to get lost. Make sure you have the address written in Hindi rather than English if you take the hotel business card, because most cannot read english lettering and its hard to explain where you want to go without it.

The highlight of Jaipur had to be going to the cinema. This was an optional activity that our tour guide suggested but was well worth it. I was the lucky/unlucky member of the group nominated to queue for tickets. Queuing for tickets was interesting to say the least… the cinema box office opens 15 minutes before the film and males and females queue separately. I got into the queue 45 mins before the film and you are sandwiched between people for the whole time. The people are desperate to get the tickets and shuffle up right against you just to get that bit closer. There is a tiny little window for each sex and a man with a stick should you try and push in. I got within 3 people from the front when they shut the box office having sold out of tickets. However bribary seems to get you everywhere in India and our tour guide had bagged us tickets all the same. The atmosphere within the cinema was incredible. There were babies to grandparents all shouting, cheering and applauding the actors and actresses. It was the event of the week for many people I think. We watched Dabangg and it was the big hit across India at the time so the soundtrack was playing in every shop and restaurant we went in after that. Amazing!

From Jaipur we moved onto Agra. Agra is the home of the Taj Mahal. It seemed surreal standing in front of the Taj Mahal after seeing it so many times in books and the media. It was incredible although inside there wasn’t really anything to see. Agra Fort was beautiful too.

I haven’t really mentioned about the food in India. I was bracing myself for “Delhi belly” from day one, but apart from a couple of days with a little upset it never came. Infact the food was delicious and not much different from what we are used to eating from the local takeaway, but better of course.

Orchha was our next destination and my personal favourite. After the hustle and bustle of the cities it was a pleseant escape. Our hotel was luxury tents within an amazing setting. Every direction you looked there were mini Angkor wats. The local town was very chilled out and you could walk anywhere you wanted rather than rely on tuk tuks.